Electronic Image Stabiliza TIon (EIS) is a technology that integrates electronic technology, computer, digital signal processing, video image processing, etc. to achieve digital image sequence stabilization. The most basic of the electronic image stabilization techniques is that the image shift compensation technique is a technique of directly detecting the motion vector of the reference image and the compared image from the image plane and then using an algorithm to compensate. The basic principle of image stabilization: (1) Local motion estimation based on various information of image sequences or video. (2) Perform global motion estimation. (3) After exercise estimation, the exercise parameters are obtained, and then comprehensive evaluation is performed. (4) Perform motion compensation based on the results of the comprehensive evaluation, and finally obtain a stable output sequence. It can be seen that obtaining the global motion vector of the image is a prerequisite for electronic image stabilization. The basic process is shown in Figure 1. The global motion vector can be obtained by a gray projection algorithm. 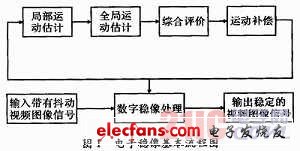 Gray-scale mapping is to map the initial two-dimensional image information input into each frame into two independent one-dimensional waveforms. The following is a mapping method for column projection.

Projection filtering is to reduce the amplitude of the boundary information, preserve the amplitude of the intermediate region, and use a filter to filter. Since the edge information adversely affects the peak of the cross-correlation in the cross-correlation calculation, the projection value at the boundary is removed. Since the edge information is unique on each image when the amount of image movement is large, the accuracy of the algorithm can be improved by filtering the projection values.

In equation (4), Colk(j) is the grayscale projection value of the jth column of the kth frame image; NC is the length of the column; m is the search width of the displacement vector on one side with respect to the reference frame. Let wmin be the value of w when w(w) is the smallest, and the displacement vector of the kth frame image in the vertical direction with respect to the reference frame image is as shown in the formula (5).